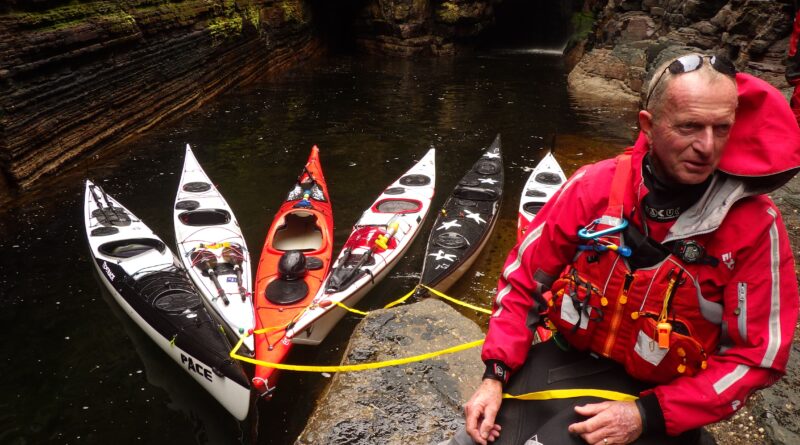 Report by Simon Morrissey with extra info from Pete Thorn

The long drive went well in three vans and a car. It was just very long.  Nigel and Ruth made their own way in their mobile home. We stayed in some mini lodges in Perth, where earplugs were advised against the snorers. A local restaurant filled us up with their carvery and we goggled at the Scottish dessert cabinet, with such delights as gigantic Snickers Cheesecake. At Thurso the next day, we strolled along the beach to see the famous surf break, though it was quiet just then. A dead whale on the beach had been examined and found to be full of plastic bags. The future looks bleak for these creatures.

The ferry to Stromness left early evening and while waiting for it we explored a massive salvage tug, staffed entirely by Italians. The campsite in Stromness was ideally placed and well run. In the end we stayed there for the whole time. On the Sunday we were gagging to get afloat and planned one of the easier trips in the guide book. It proved to be no cake walk.

Pete asked me to lead at last minute, I wasn’t sure it was on. Group couldn’t stay together, Emily’s Etain was being badly behaved. I think she gave it a jolly good talking to. It was very windy and after about an hour we had covered less than 2 nautical miles and we couldn’t see the headland any more. We were not equipped or briefed for the 6 km crossing in no viz. Pete took Nigel and Maria back. I pulled the whole trip. Difficult choice and sad to have upset some people but I stand by the decision. Very nice café in a church with jewellery shop.

That evening we met back at camp to review the day, gather any learning and plan the following day. We had access to the relevant OS maps, charts and guide books, as well as the internet. This was the pattern every day and kept us realistic in view of trip exposure, wind and swell forecasts.

09:30 on water at Campsite Slipway. Round Mainland heading W, Ferry glide across the flood tide. Then used the small end of tide to cross over to Hoy slip, quite shallow. Paddled on down Hoy Northeast, Lot of wind where the mountains didn’t shelter us. Nice cliffs. We checked out a salmon farm, where feed was being sprayed automatically and fish were jumping. There were a range of views on the fish farming practices and concern about their eco impact. Paddle across to Graemsay slip needed planning because of flow. Lunch then home, again transits needed because tide running out fast. Wind across tide quite awkward sea state not big but steep waves wind across tide in the tide race. Good day. Overcast little sunshine. 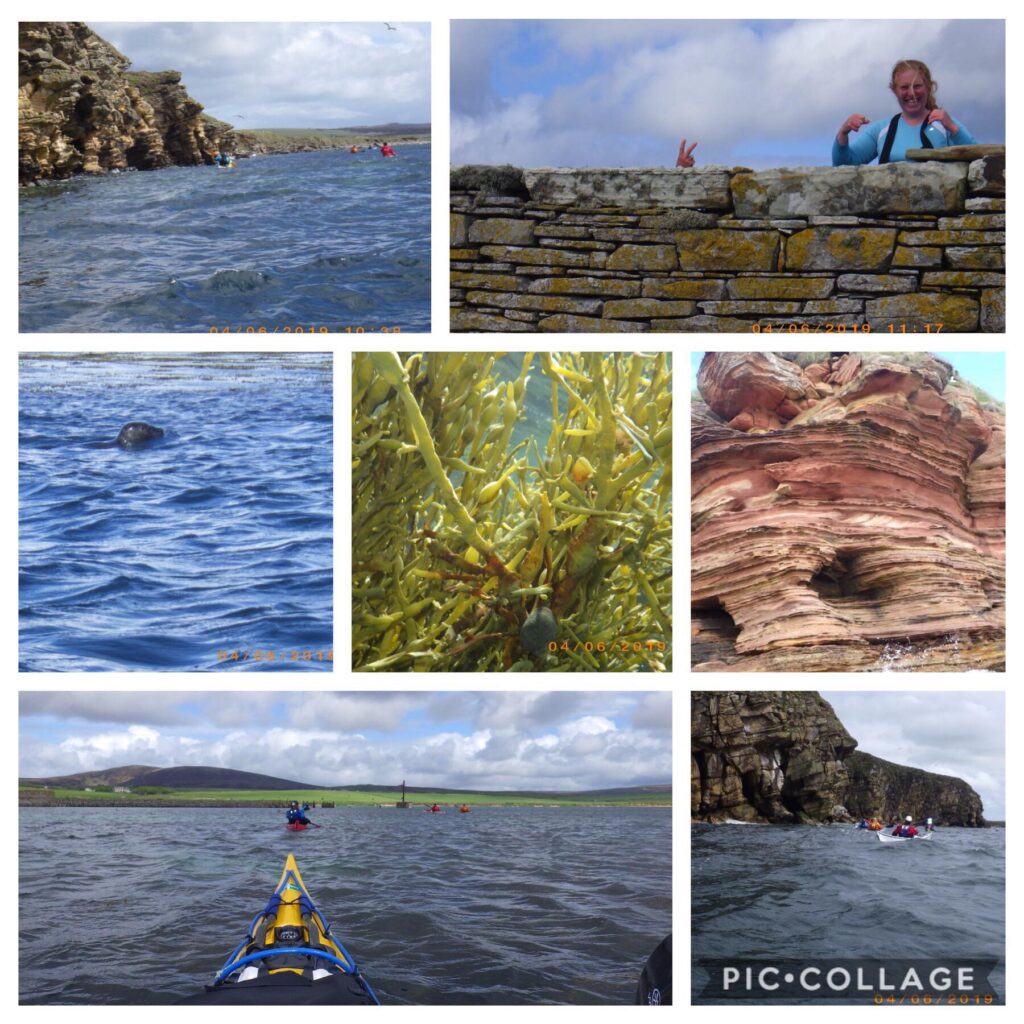 08:45 on water at Sailing Slipway. Hot sunny paddle. Tide race North and NE of Graemsay. Two hours to Lunch at Swanbister Bay. Saw Ocean Plastic Clean up ship ?? Greenpeace?. Lovely low cliffs & nice coast. Scapa Flow is an inland sea, perfect as a safe anchorage for the British fleet in two world wars. It was 100 years since the captured German fleet scuttled their own ships to deny the Allies possession of them. 70 ships went to the bottom and the salvage operations went on until the 1950s. On to Scapa Bay, Great little green waves surfing on way in. One roll for me. Went to Orkney Whisky distillery, Ice Cream great Whisky expensive.

12:10 on water tide had definitely turned. Two hours easy paddle to South end of Churchill Barrier No 1. Easier get out and in there than at North end. Italian Chapel we visited before paddle. This was built out of two Nissen huts and scrap material by Italian prisoners captured in North Africa and sent to freezing Orkney to build Churchill Barriers. The work is stunning and well worth a visit. Good surfing on green waves. Lunch at Barrier. Bit of beach cleaning. Just under three hours approx 2:45 after lunch. Into wind to cross from Lamb Holm, not too bad round Roseness point and then into big tide race with wind against tide. Not technically difficult but it went on for a long way, tide had turned north by the time we got there. 3:30. A bigger flow ie a later arrival could have been interesting with large breaking waves. Easy land at Taracliff Bay parking not a huge car park. Long day but really good. 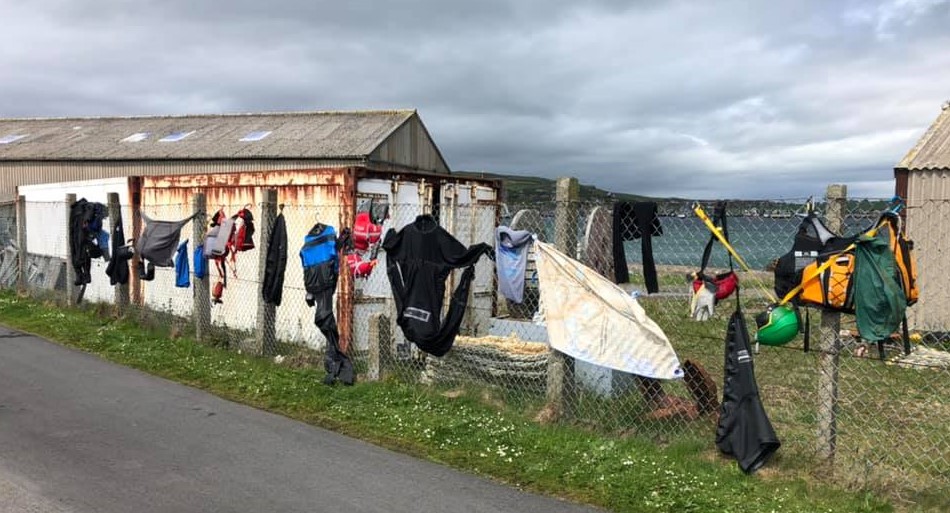 06/06/2019 Windy and tired. Team rest day. A wander round Stromness with visit to the Museum, which is exceptionally good. 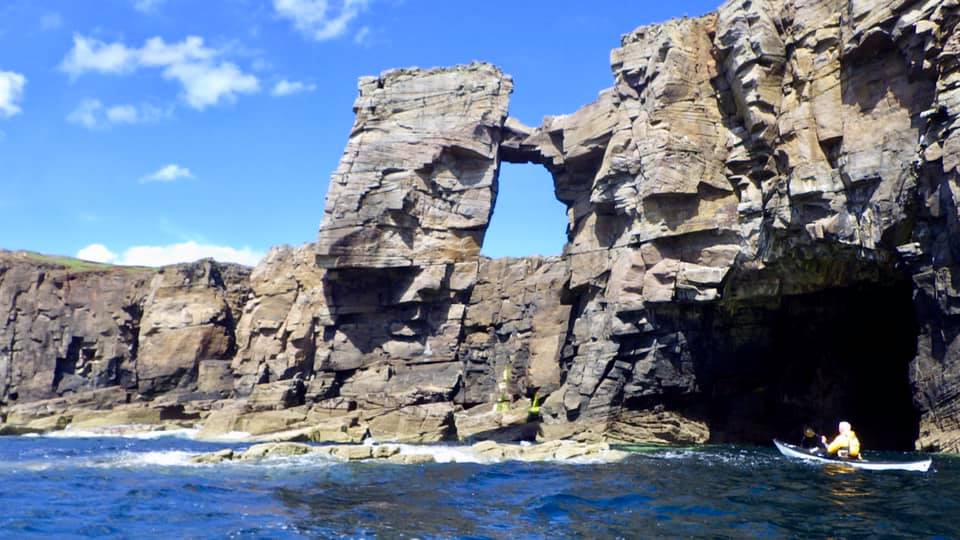 13:05 on water at Slipway. Hugged coast round to west side Mainland. Tide had just turned, Bumpy round corner and it felt a lot windier. Ocean swell 1.7m or more. Big exposure, no landing before Bay of Skaill. Two stacks and wonderful slotted caves. The sun came out. The cliffs were an ochre colour with green patches and streaks. 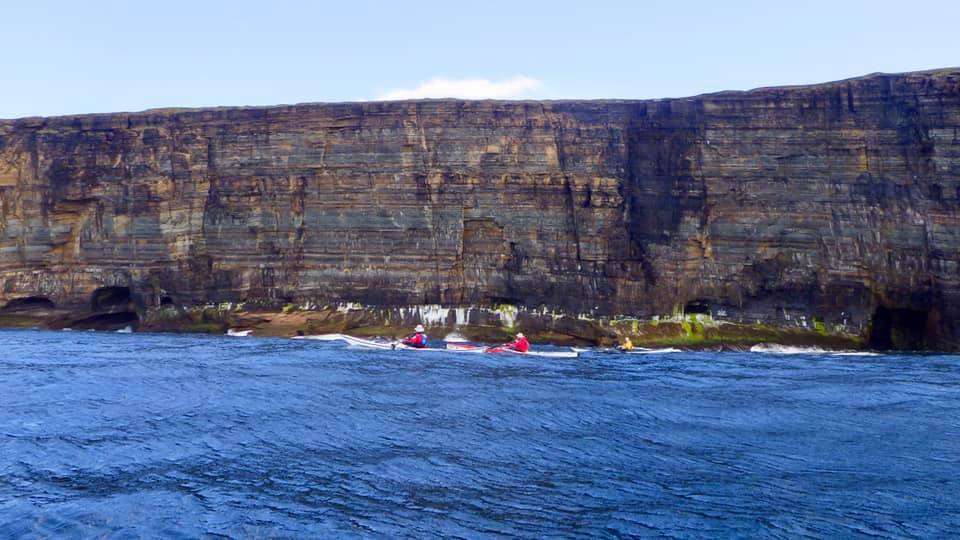 The water was very clear and aquamarine. Spectacular. Lunch 15:50 in Bay of Skaill by Neolithic village. Breaking surf offshore. On to Marwick. Long carry over slippery rocks to cars. “Best coastal trip ever” Pete Thorn

Put in at top of B9051, because the walk across Sandi Sand didn’t look sandy and was huge. Other four led by Greenie paddled round bay in increasing wind. This turned out to yield useful intel for the 9th! 11:00 0n water, Long slow slog into wind and tide round to Mull Head. As we got closer the tidal run into the bay became tide running into BIG tide race. > 2 m, five star water really good fun, rocky landing comfort break, then onto the Gloop. A deep roofless cave marked on map. Lunch here on big flat rocks. Pete very bravely tied himself to the boats. Rock hopping onwards Tammy Tiffy. Air Temp getting a lot colder. Landing at Taracliff Bay again. Very good day. 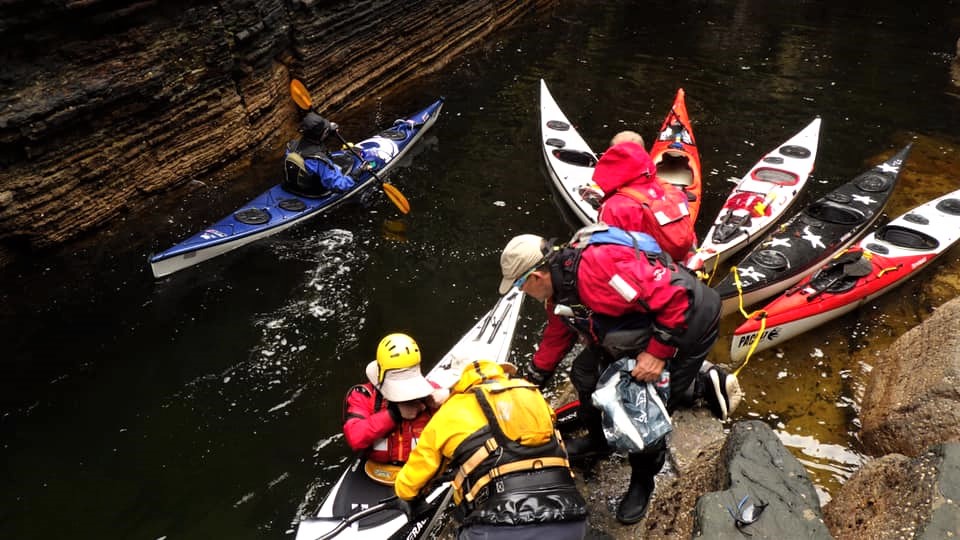 Launch at Ferry slipway, there is another slip opposite side harbour but no toilet there. Ferry was in when we launched. Some slippery material made the boat carry interesting.

Easy paddle, bit of early uncertainty re navigation, Emily put us all right!  But Passenger Ferry led the way. Odd visibility left the view of a small island on left foreshortened the perspective a bit. (you had to be there). The String Tide race was unfortunately barely a ripple. 13:20 Lunch at Rerwick Point. Fantastic caves and Chasms some of which Greenie had explored the day before. The Hole of Roe etc hoatching with birds one vomited at me and missed.  Matt met us on Mill Sand then back to the Church Café !!!

While this went on, Adam, Kevin and Pete played the tides to get round the northern end of Hoy to visit the Old Man. It was clearly a viable trip given reasonable conditions, but exposed. A highlight for Kevin was paddling within touching distance of a massive Basking Shark in Hoy Sound, apparently now a rarity in Orkney waters

In the evening, some of us went to find a remote farmhouse where we were promised Orkney story telling by an open fire. It was an interesting and well-researched insight into history and myth, as Orkney was once run by the Norsemen, who spoke Norn. Lots of mermaids kept occurring. The presentation was lively/cheesey. The animators kept stoking the fire, while we sweated, breathing the wood smoke and fumes from the paraffin storm lamp! 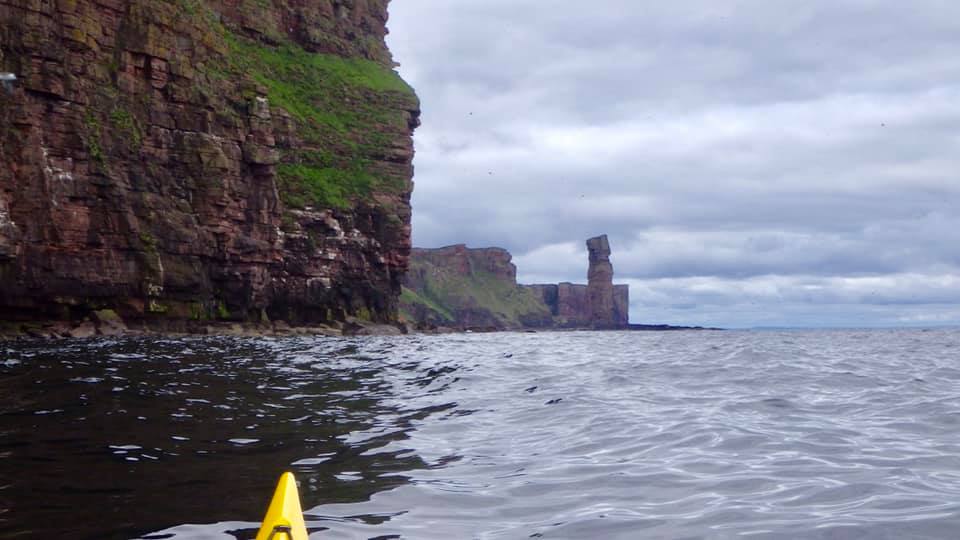 Launch at Slipway. Choppy at west end Graemsay and North end Hoy, Smooth down to Old Man, Choppy here landing on South side of causeway. Lunch here. (It transpired that Simon had been part of a group which successfully climbed this crumbly monolith, almost forty years ago, to the day.) Once tide turns to flood and into wind tricky rough all the way up west of Island. Into Sound, tide picked up and ferry glide and transits were needed to avoid being swept into Scapa Flow. Cliffs were the best. Fantastic, rising vertically for 300 metres. Four star conditions in a 5 star situation. A memorable last paddle 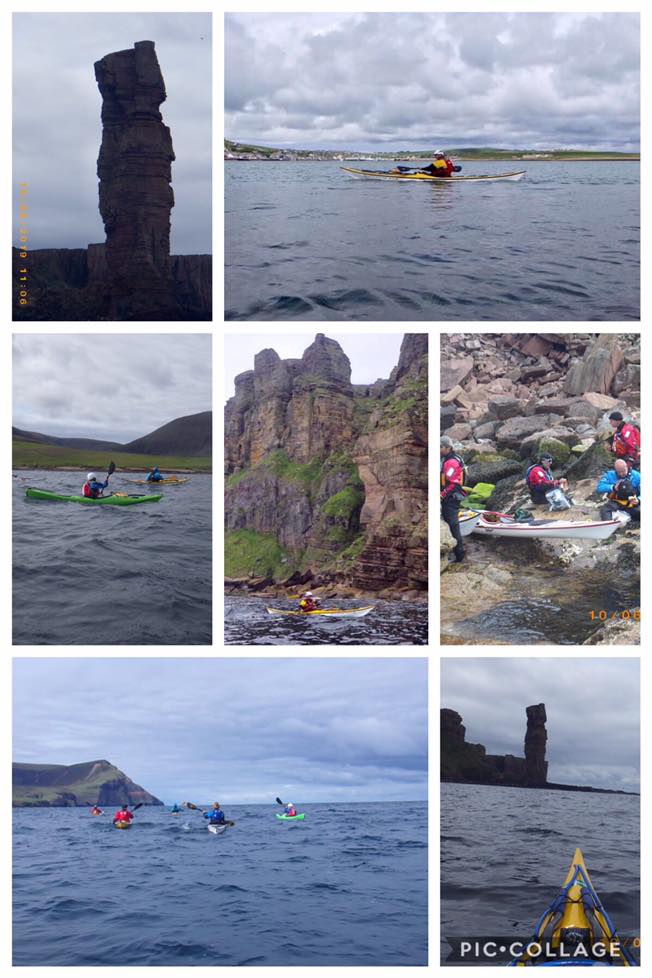 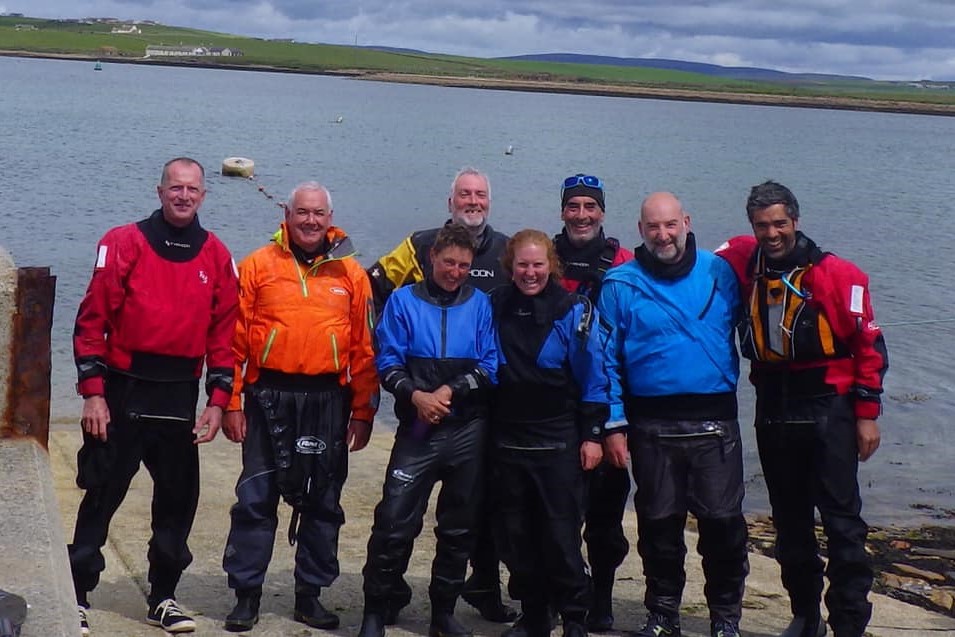 11/06/2019 Too windy and Wednesday predicted to be worse so trip shortened one day. We went off exploring, some to the sites of pre-history, others to view a massive tide race. Next day left patches of faded grass behind and headed back towards the much busier SW.

Overall a good trip, costing about £300 for two weeks, not including food. The travel took most of this, as camp fees were just £80/person. In terms of paddling, this is a stellar destination, though always breezy. We only covered a fraction of the wonderful routes available. In Early June it was much like Devon in winter, so coats and hats needed. At least there were no midges! 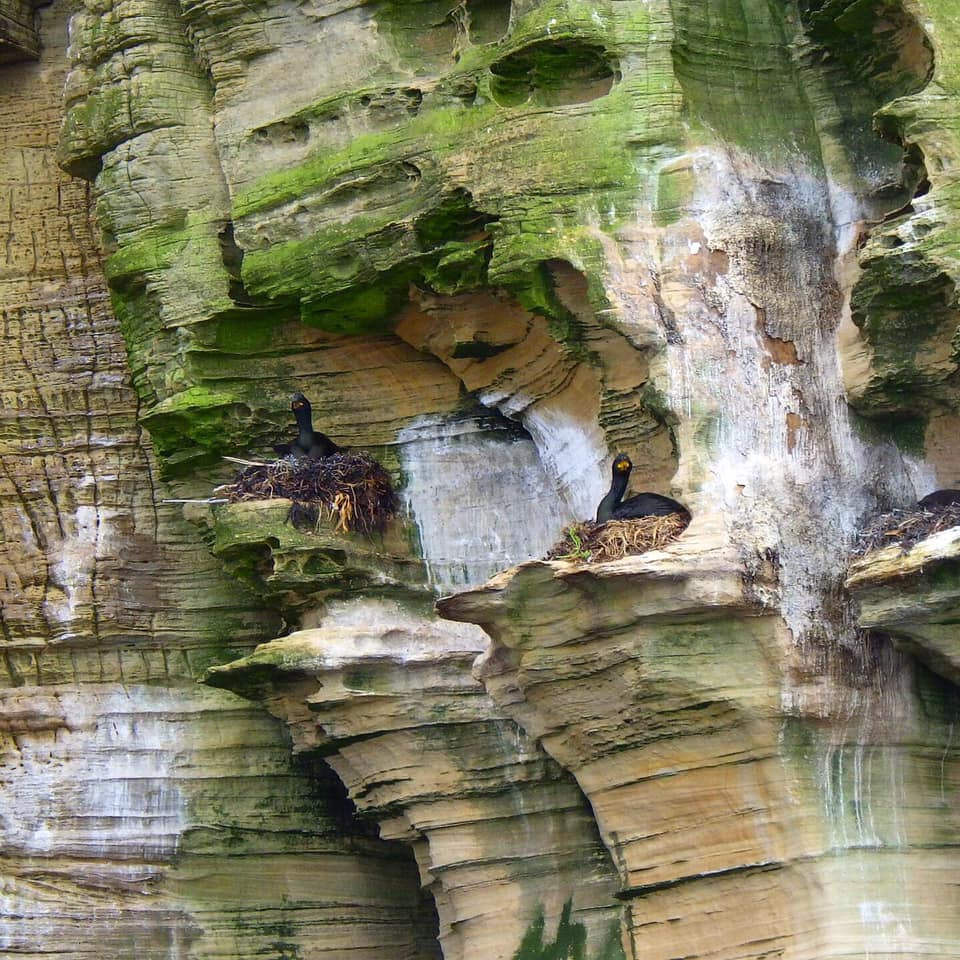