After 262 nautical miles (288 statute miles), four sea kayakers from Bideford Canoe Club landed on Holy Island in Anglesey. This was after thirteen days paddling, a day ahead of schedule. Our passage from Appledore in North Devon had been made in ideal conditions with sunny days and light winds. A day later, heavy weather arrived, so the timing was excellent, if entirely outside our control. 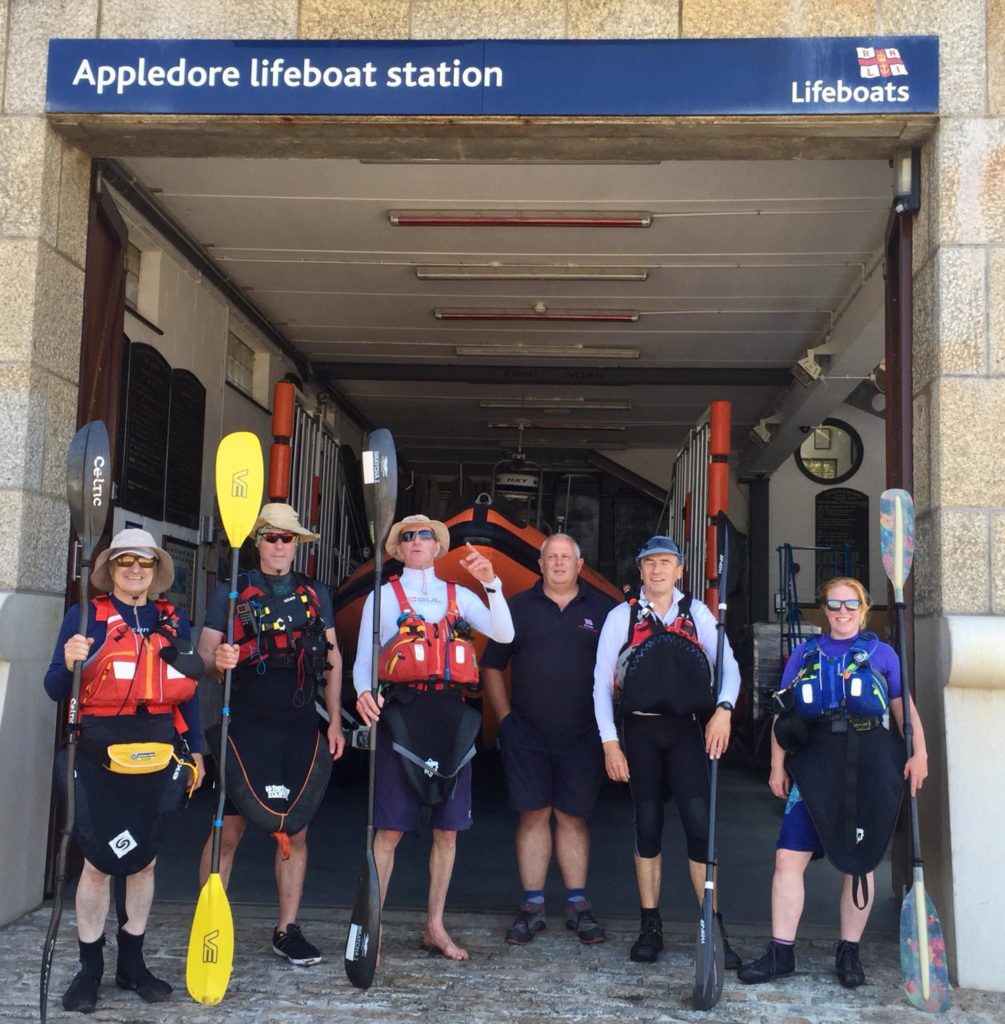 Five paddlers had set out but one had to withdraw, a result of a shoulder injury in a tide race in Pembrokeshire. The adventure began on Friday 13th July, when unphased by superstition, the group paddled away from family and friends, towards Bideford Bar and the open sea. In our heavily laden kayaks were all the things needed to live for two weeks, including tents, camping equipment, food and enough water for that day. Leaving Hele Bay on the second day, we crossed 24 nautical miles of the Bristol Channel to Port Eynon on the Gower. This took 6.5 hours of careful navigation, crossing strong tidal flows and was an early crux. We wild camped in the sand dunes, which was to become the daily norm for the next two weeks. 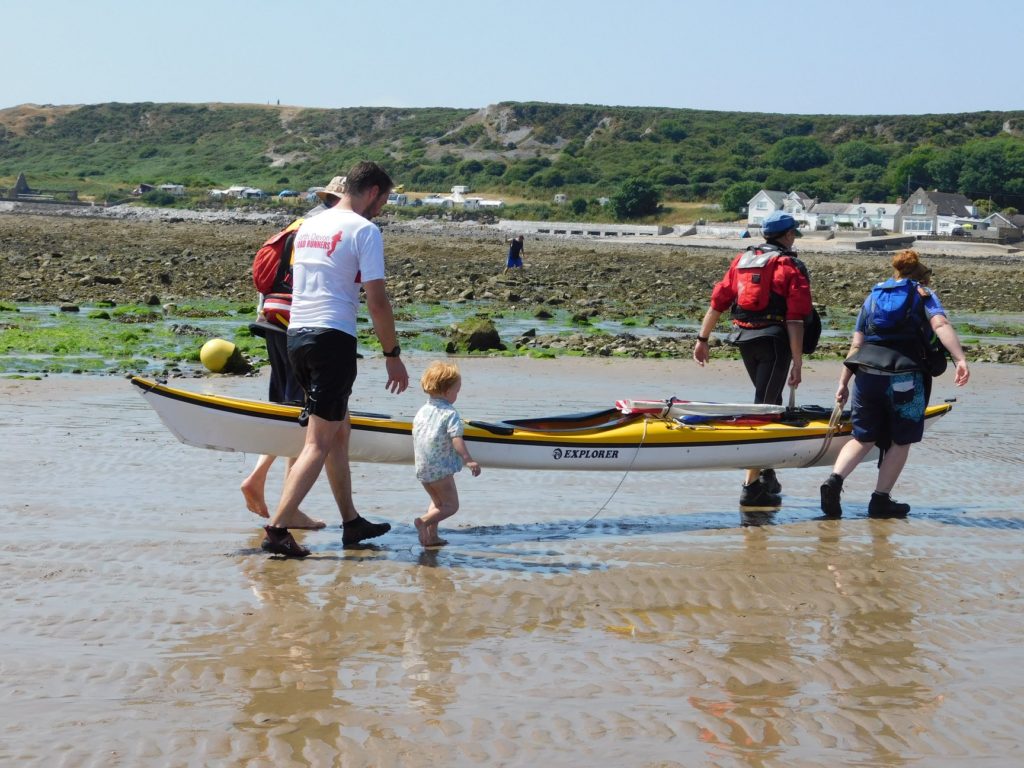 On landing, it took four people, (and Henry) to carry the heavy kayaks clear of the water. Then all equipment was unloaded and carried up the beach in big bags. So, several trips were needed to get all the kit above the high-water mark. Wet clothes could be exchanged for dry and a meal prepared. Time to relax, though on a few days the group did not land until well into the evening. Small tents were erected and sleeping mats blown up before sinking into an exhausted sleep. In the morning all this was reversed, finally pulling on wet paddling clothes and doing it all again. It took at least an hour and a half from waking to paddling away into a new vista of coastline. 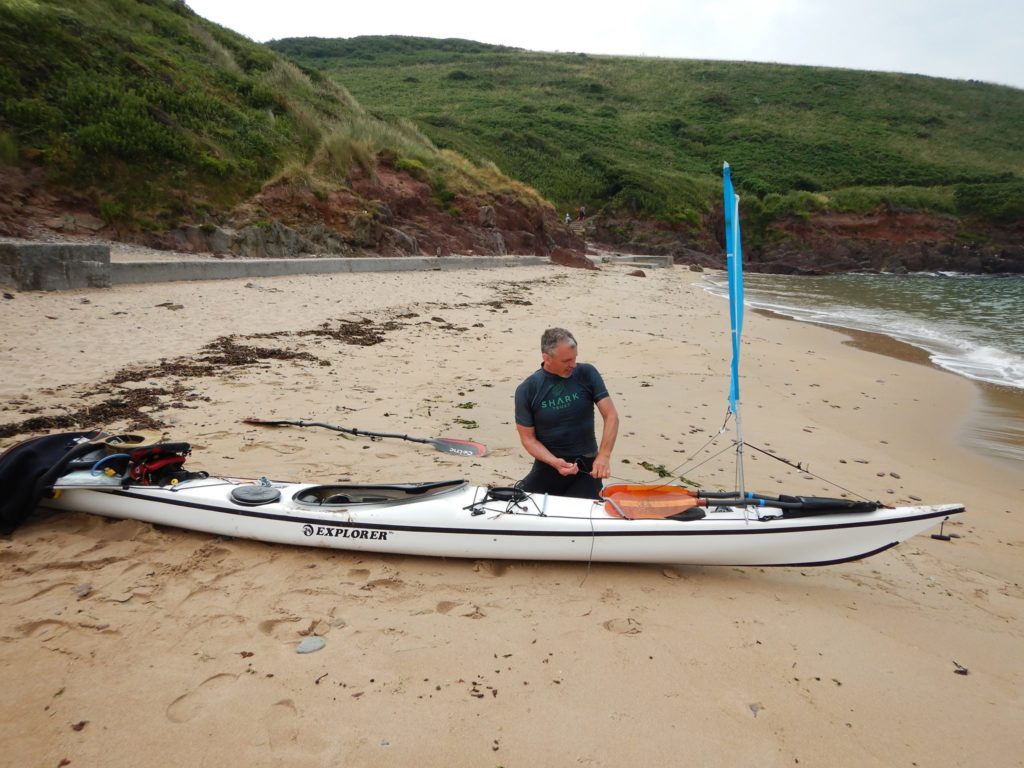 During the trip, the group only found one accessible commercial camp site so used stony storm beaches or scrubby grass sites as well as the unpopular sand, which got into everything including our food. 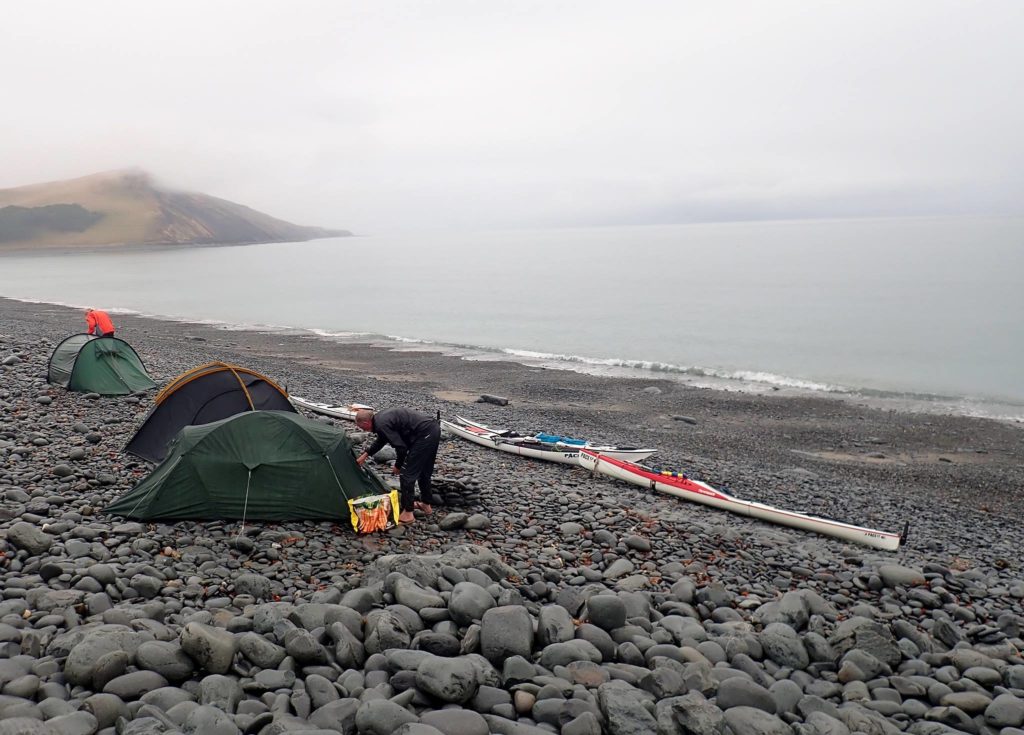 On departure, litter was picked to leave the beach cleaner than we found it. It was remarkable how unpopulated the Welsh coast was, with long stretches of wild and beautiful scenery and few accessible shops. We crossed the expanse of Carmarthen Bay, helped along by an ebb tide and southerly wind, landing in the pretty Manobier. 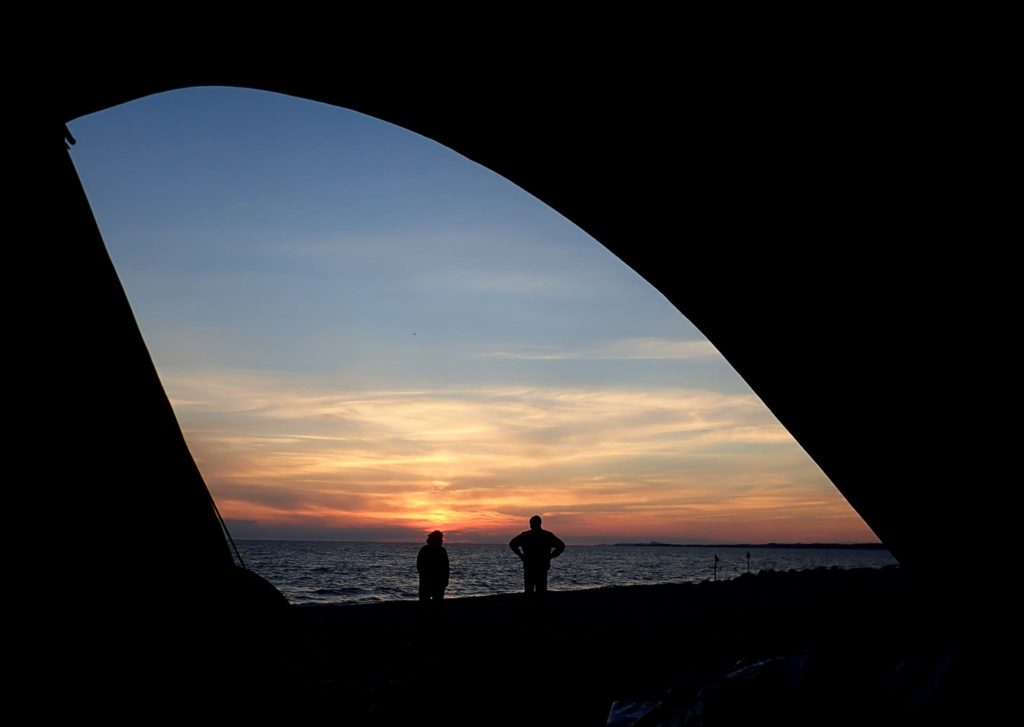 The next day proved to be our worst. Heavy rain that morning soon cleared up and we approached the MOD firing range at St Govan’s Head. The recorded message had predicted no firing but this proved out of date and we were stopped by a range boat. Firing was planned till 3.30 so we had to wait on a beach till this ended. By then the tide had turned against us and it was a slog to inch round the main headlands against turbulent tide races. Using back eddies in the bays we made slow progress, finally pulling clear of this seven mile stretch at 7.30 to camp in the sands of Freshwater West after four hours paddling non-stop. If we had failed to clear this big range area we would have been stuck for days as both day and night firing was  planned.

The next day we crossed the busy shipping channels of Milford Haven and were properly in Pembrokeshire. Bird life was abundant, with puffins unafraid as we slid past within touching distance. Almost every day we saw pods of dolphins, sometimes surfacing very close to the boats. They were curious and apparently friendly, though efficient hunters of fish. Most striking was the plethora of jellyfish, seen in great variety all the time. The warm summer seemed to have allowed an explosion of numbers. Does anything eat them apart from turtles? 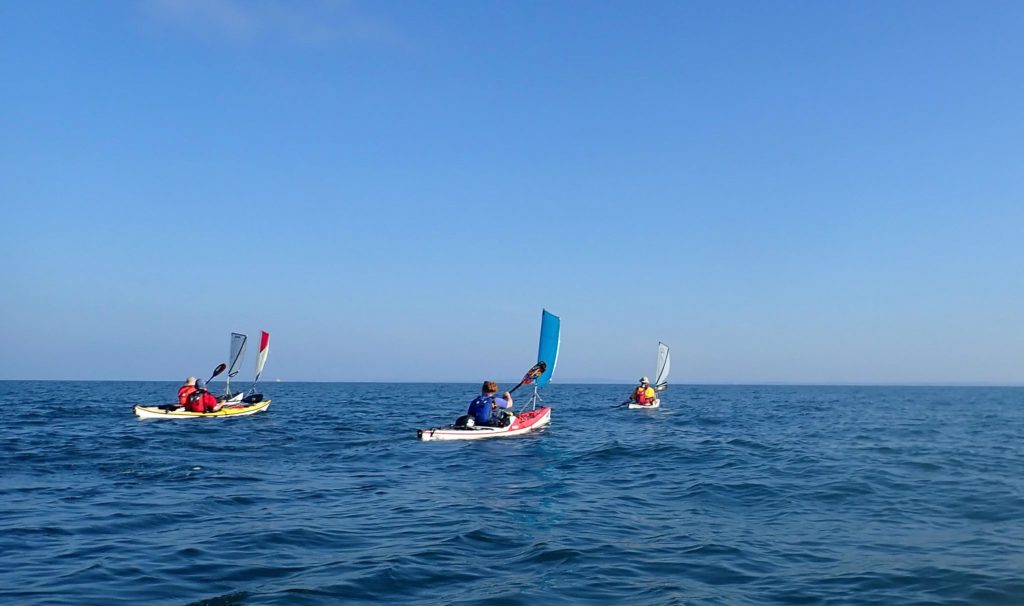 At St David’s we found a camp site after a steep climb and were able to get a shower before walking into this tiny city for coffee, ice cream and much needed shopping. On the following day we crossed the strait to Ramsey Island, upstream of the notorious Bitches tidal rapids. To go around the island seemed essential, as it is an iconic kayaking destination. We shot through the Midland Gap into a welter of confused white water as the incoming tide compressed and accelerated. Some good skills were needed to stay upright. After another tide race we passed through a sea cave and then used the helpful tide to get around St David’s Head. The wide expanse of Cardigan Bay started to open up before us. 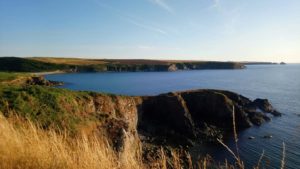 We spent many hours paddling, having long conversations with friends or day dreaming while paddling your own course a little distance away. Every hour we would have a brief break for drink and a snack to keep up energy levels. Pee relief was very basic so boats and shorts needed swilling out at the end of the day. In choppy conditions and with long stretches of cliffs there were few alternatives to just letting go! 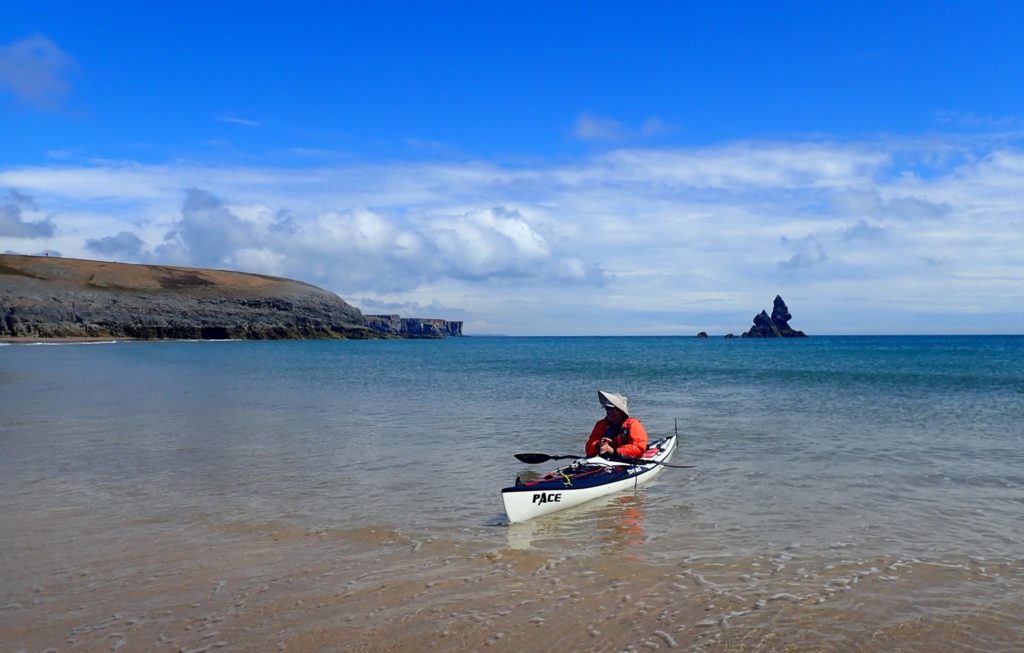 Part of the trip challenge was to raise some money for the RNLI. We called in at seven stations on the way and were made very welcome with tea and biscuits. In Aberystwyth we landed on the day of their annual barbecue so were fed until we could hardly walk back to our stony campsite. We used their showers so were less smelly than usual. The crews have strong community groundings, with members as young as seventeen working with veterans of thirty years service. They need our support and our giving page is still open at https:/mydonate.bt.com/fundraisers/a2a 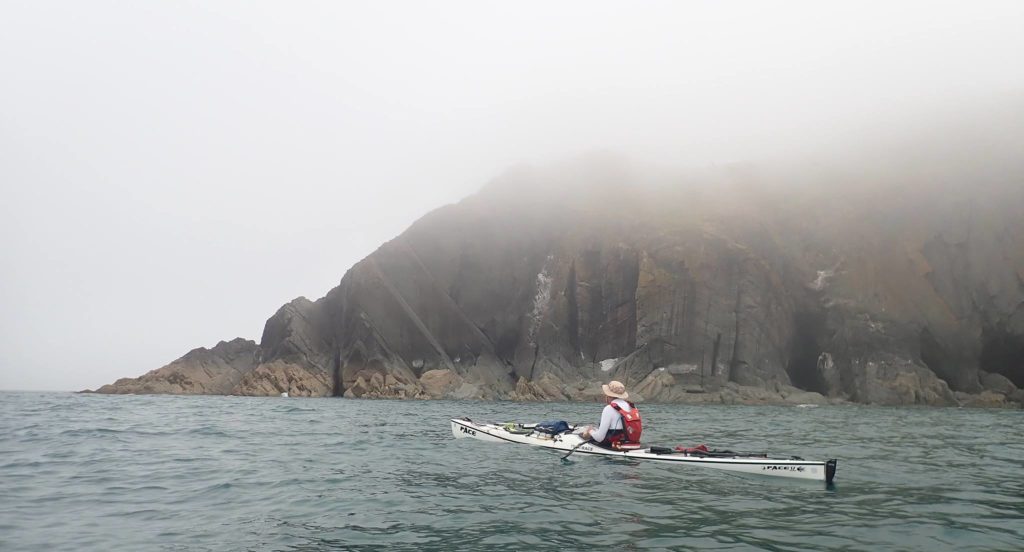 As the changing coastline passed by we saw abandoned quarries and stunning rock formations, ranging from strangely eroded glacial moraine to volcanic columns and twisted layers. Arches, caves and sea stacks were dramatic, usually unseen except by local fishermen.

The slog into Barmouth seemed never ending. Were those distant blocks of colour beach huts? They turned out to be four storey houses which never seemed to get bigger. 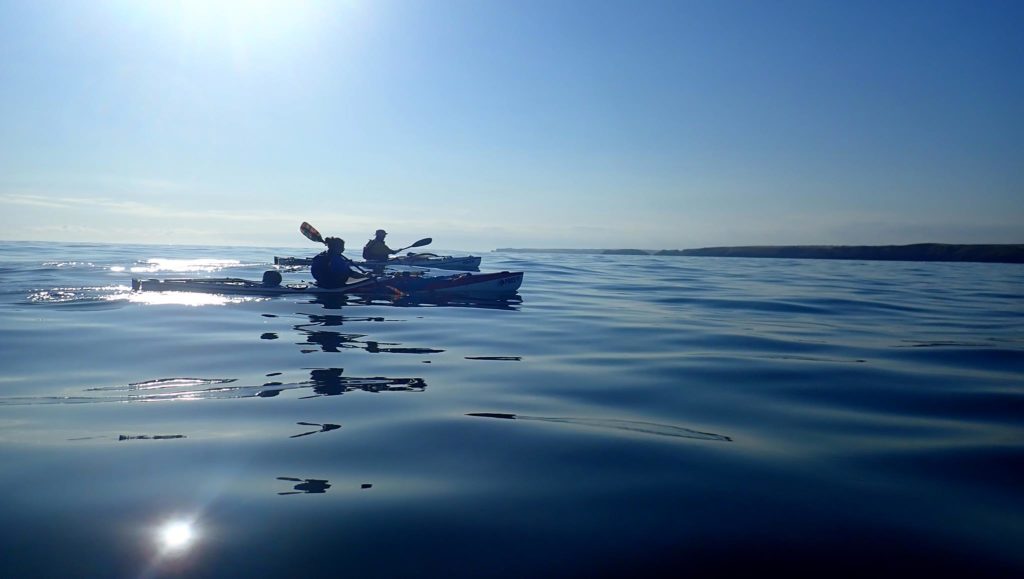 The following day we were due to complete the last open crossing to the Lleyn Peninsula. Two options were considered, a direct crossing, or a more scenic route along the coast followed by a shorter crossing. In view of the benign weather forecast, an amicable split was made, with our very experienced solo paddler opting for the scenic route. The  remainder of the group, who had less time available,  took the direct crossing which proved to be  particularly tedious on an oily swell. A distant speck gradually became a lobster boat which in all that sea sounded his horn to get us out of his way. He then asked us if we were lost. As the Tidwal Islands took shape we discussed Bear Grylls who owns one of them. His large floating pontoon was too attractive so we lay flat on the black plastic to soak up some warmth in the sun. Thanks Bear! 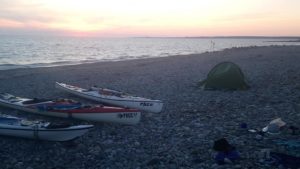 With a helpful tide we completed the distance up to the Menai Straits and camped on a stony storm beach.  This was to be our last wild camp as only 16 nautical miles remained to Porth Dafarch on Holy Island. The tide would be against us till late in the day, but a helpful southerly wind sprang up. We put up our sails and made rapid progress, landing after four hours paddling among holiday makers and many jellyfish. A friend ferried us to Anglesey Outdoors, a campsite just one kilometre from the beach. We were able to access a washing machine and drying room, so we quickly became nicer to know. A good meal in Treaddur Bay rounded off a fine last day. 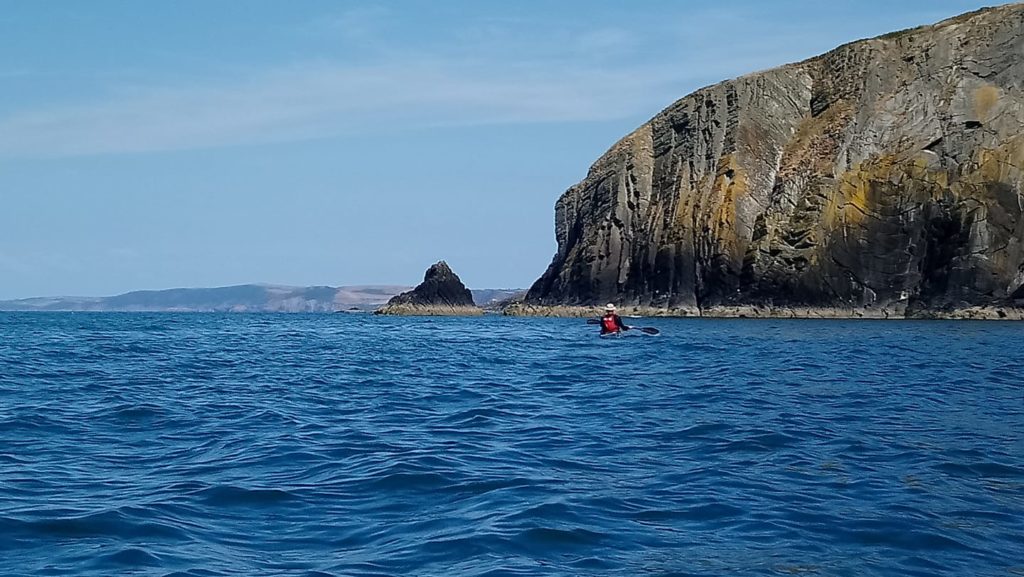 To  our great surprise our solo paddler arrived in the gathering gloom, just seven hours behind the main group, having tailored his efforts more to use the tide more effectively. The reunion was jubilant with congratulations all round. It was a tortoise and hare story. 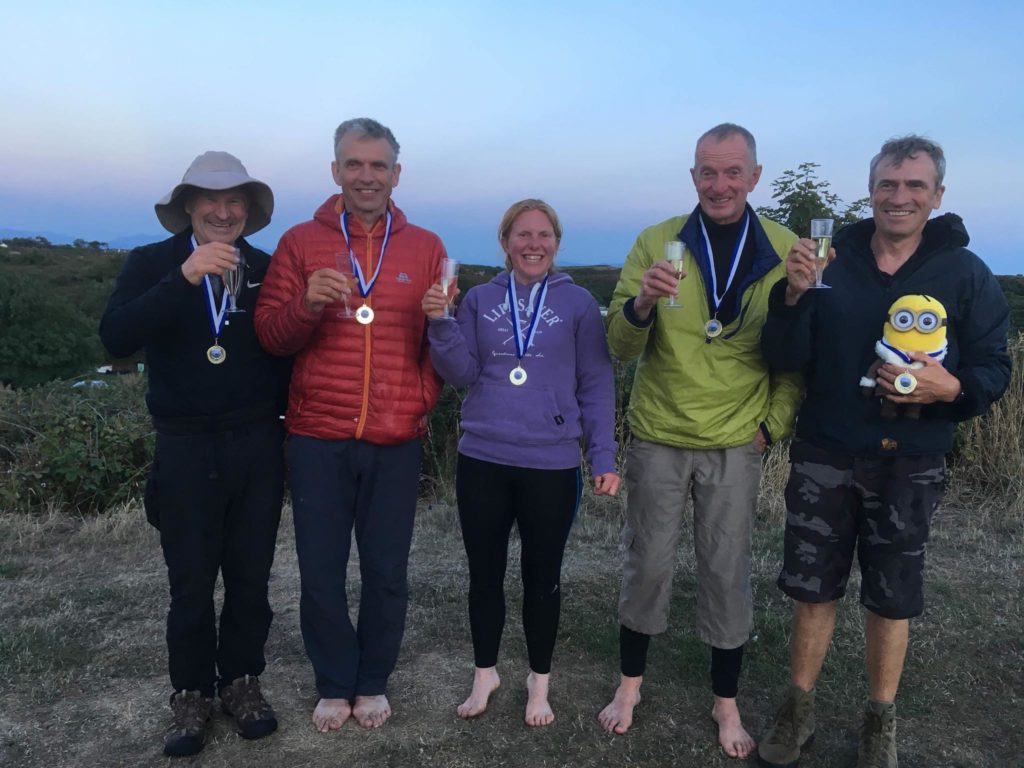 There was more sunshine the following day so we played in the tide race at Penrhyn Mawr before paddling round into Holyhead Harbour to visit the RNLI station. The staff were particularly friendly and told tales of dramatic rescues. We reflected on the storm force 12 conditions in February which had destroyed the marina at Holyhead and sunk almost every boat there, apart from the lifeboat which they had moved into the dock area. A sobering thought that July is a better time than February to visit Anglesey.

Back home in North Devon the summer continues as we plan to take young people from Bideford Youth Centre out on the estuary to start their own adventures.