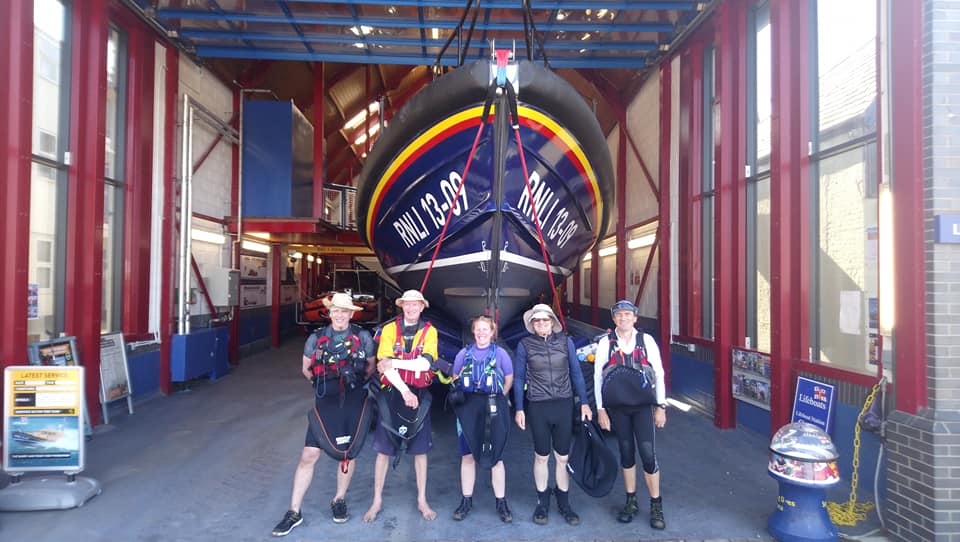 On Friday 13th five local sea kayakers from Bideford Canoe Club set out on a 300 mile adventure. Ignoring superstition regarding the date, it was chosen to suit tide times rather than as an antidote to the arrival of a certain president. The trip title has been shortened to ‘A to A’ by the team, meaning our own Appledore to Anglesey in North Wales.

Leaving from the RNLI station in Appledore, the team aim to visit other such stations along the way, raising money for this, their favourite charity, while being determined not to be rescued by them. The trip will be self supporting, carrying all their equipment in their kayaks, camping on the way and cooking for themselves, unless a convenient fish and chip shop is discovered.

The team has massive experience of ‘living out of the boat’, some having travelled in Greenland, the USA and the wilds of Scotland. For Emily Harding it will be a wrench to leave son two year old Henry but as a cross channel swimmer she is used to endurance events. John Rowe quipped that future trips could have the same ring to them, such as Croyde to Corunna, or Bideford to Budapest, but for now A to A is challenge enough. Ian Dring is something of an ‘ultra paddler’, having previously set out from his south Devon home to solo up to 50 miles along the coast. Kevin Sumners has done much of his sea paddling in the Americas, on both east and west coasts, gaining some of the US highest awards in sea kayaking. Pete Thorn has been paddling since he was 12 years old and now, at seventy sees the trip as ‘adventure before dementia’.

The big challenge of the trip will be the Bristol Channel crossing, from Ilfracombe to the Mumbles area, an exposed passage involving nearly thirty miles of effort across a busy shipping lane. All the team have mini sails on their kayaks which may help, depending on wind direction. As they follow the Welsh coastline they will experience all sorts of weather on the exposed west coast, while searching out the best ice-cream shops.

Their destination is Holyhead on Holy Island, part of the big island of Anglesey. This is the area of monstrous tide races, where spring tides flow at up to eight knots and can create huge standing waves. Anglesey is a Mecca for experienced sea kayakers and other club members will meet them there to explore its big waves and strong currents, before giving them all a lift home. The trip should take no more than 13 days before arrival, but this is weather dependent. Pete was last there in February during ‘Beast from the East’, experiencing 20 knot winds and snow, so the July conditions have to be an improvement.

The trip can be followed on the internet through the A to A Facebook Page and their live tracking page.  Your donations to the RNLI would also be warmly welcomed.

Bideford CC has a large group of sea kayakers as well as enjoying year round surf kayaking and winter river paddling. Two groups have recently returned from France, one visiting white water slalom courses near Lyons and the other paddling the icy Alpine rivers near the Italian border. The club offers all standards of experience and welcomes beginners through its indoor pool pool sessions.