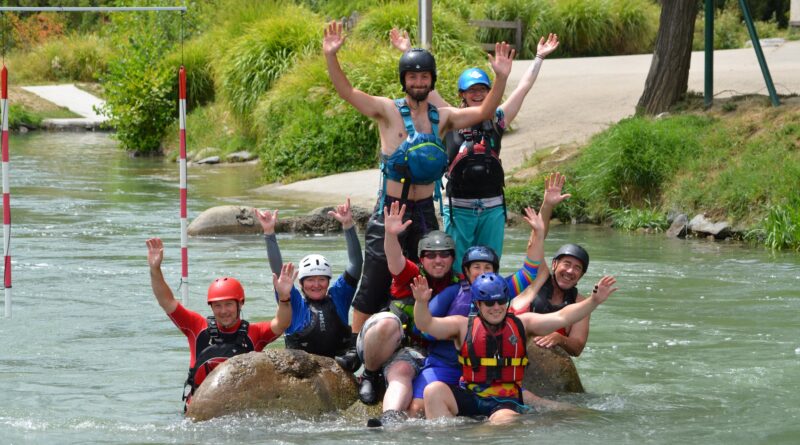 Another successful year for the Club, with nearly 170 members by the end, a record. Through careful financial management (thanks to Tommo) we have a better financial situation than ever before. Applications for funding for training have been very successful (thanks to Olivia and others), raising enough to fully cover commitments. We now have an enviable number of river and sea leaders, with three at advanced level. We also have three qualified open boat leaders.

The year kicked off with our Club Dinner at the Thatch and the river season was blessed with steady flows and excellent organisation, (thanks to Pat and leaders such as Nathan and Dave.) The slalom course was erected at Dulverton for the March competition. Sadly, this had to be cancelled because of river levels. Its future is under review, as this was two cancellations in a row. It maybe we will aim to have a limited course in place for three months so paddlers can practice on a free basis, rather than a full competition. Thanks to Doug Smith for driving this project forward.

The pool sessions proved very popular and the three-session format was a success. As we moved into spring, the kayak proficiency course was launched on a ten-session basis. The new syllabus does not require open boating so the focus could be concentrated on kayak skills, including a taster in sea kayaks. Thanks to Greenie and his team for delivering an excellent experience for the group. It was gratifying to see skill levels and confidence grow by the week.

After the Thursday pool sessions finished, sea kayaking took its place with the lighter evenings. Aiming at three-star level the group developed well, with a variety of conditions, as the weather provided. Greenie will give a run down on the impressive amount of training completed during the year. Thanks to members for organizing a series of easy paddles on the estuary. These prove immensely popular with new members. Surf sessions on Friday nights happened when there was surf. On one evening there were 21 paddlers in sea kayaks!

Public events included safety cover for the Bideford Water Festival, where intrepid young designers tested cardboard craft against the murky waters of the Torridge with mixed success. We provided safety cover at Triathlon events, gathering useful funds for the Club. The star event was Greenie’s Ferret Racing, held in Croyde Village Hall to tap in to the holiday makers. With a BBQ and good attendance, £1100 was raised in a couple of hours. A brilliant bit of work, not without its stresses. Thanks Greenie!

In June eleven members headed for Orkney for two weeks. The conditions were a bit wintry but we completed some great paddles, including landing on the Old Man of Hoy. Later in the season, Lizzie Garnett paddled through the Orkneys, and Shetland! I am looking forward to hearing more of this adventurous trip shortly. After that, a few members paddled extensively in the French Alps. A strong group went to the Lyons area to experience warm white water and French ambiance. A perfect way to hone white water skills. Thanks to Nathan and Tommo for organizing another great trip. During August Emma Fishleigh travelled all the way to Peru to compete in the surf kayak World Championships, of which more anon. In September the Club played a leading role in the new Summer Sigh sea weekend organized by Darren. This attracted over thirty sea paddlers from outside the area to experience what the North Devon coast can offer. A great first event, to be repeated in mid-September this year. Then immediately off to Falmouth for the club Sea Week, open to all levels of experience. This is a successful format and we will look at a different venue this year as Falmouth is now very familiar.

As the autumn rolled in, we have had exceptional amounts of rain, keeping rivers topped up and giving great scope for white water adventure. Problems have been river levels in spate and too many fallen trees, but nasty incidents have been avoided through good leadership and judgement. Our efforts to be as inclusive as possible have resulted in some very good personal progressions and the Club has made some equipment purchases to aid access.

On the premises front, I am pleased to report excellent progress on securing a contingency fund. Thanks are due to Tommo for his financial discipline in achieving this so quickly. It is clear now that the current Youth Service contract has been extended for a further three years. As far as we know, our Service Level Agreement will remain as at present.

Training Officer’s Report for the 2019 season.

2019 was another busy and successful year.  It was the first year that we delivered the training kayak course under the new British Canoeing Paddle Sports Award Scheme.  13 club members regularly attended the training sessions as we rolled out the new Start and Discovery Awards. The feedback was positive and as usual we had great support from our experienced club members when delivering the training.

The regular Thursday evening sea kayak sessions were well attended again this year with one evening seeing 22 club members on the water at Sandymere.

The annual Introduction to Sea Kayaking day was held at Hele Bay and attracted a large number of first time sea kayakers.

The pool sessions continue to be busy and over-subscribed, thanks again not only to the instructors but all the guys responsible for organising the sessions and for hauling the boats to and from the club hut.

As part of the clubs continuing personal development policy, we strive to organically grow our own instructors, leaders and coaches.  2019 saw the following development training.

To enable the club to offer more trips that will appeal to the wider  membership with a variety of crafts, I am currently talking to the British Canoeing Regional Training Officer with regard to delivering a Paddle Sport  Leader course. Some of our members have expressed an interest in gaining this award; feel free to contact me if you would like to register your interest in this training.

So to summarise, a great year of achievement with lots of time spent on the water ☺